Fushimi is one of the famous homes for sake in Kyoto, so I was very pleased to find out there was a sake event being held. The event was well advertised, so much in fact that by halfway in the day, sake had already ran out! 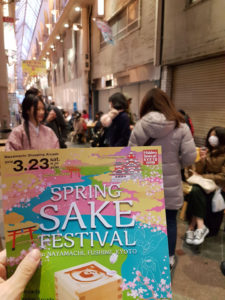 I first arrived at 5PM, only one hour into the event and still relatively early, however, Nayamachi was already full and bustling with many sake lovers. This was also the opposite end of the main sake shop! 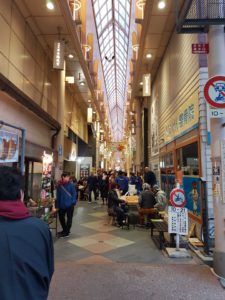 The street was filled with people from back to front, with the many aromas of food vendors as you walk past, from Japanese beef, to Indian curry – a perfect friend to all sakes. 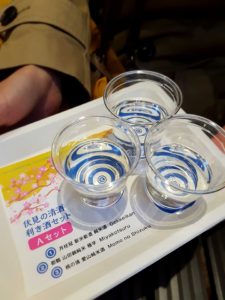 We could purchase sake sets in 3, ranging from 500 – 600 yen with 4 sets in total. It was nice that they are given in a nicely presented tray with the names of the sakes underneith, as it is very difficult to tell them apart only by colour and without a professional tongue. I enjoyed two sets of sake with a friend with a set of fish nibbles from a food vendor. 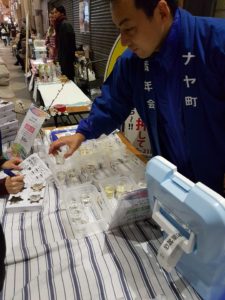 As we approached again for the remaining two sets, other foreigners were in front of me purchasing sake too. It seems that this event was quite popular to Japanese residents and foreigners alike! 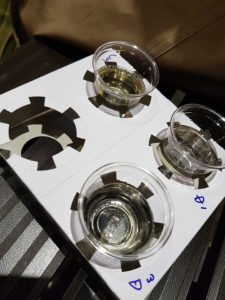 To our demise but to Nayamachi’s success, all the sake sets have already sold out by ~6:30PM! There were still was still 2.5 hours left to this event and I knew other people who planned on coming at a later time. At this point, there was some remaining sake where we could pick 3 from any set, mixing and matching, for 500 yen. We enjoyed this with some samosa close by, and eventually left with the street performers still playing as we walked by.

Overall, it was a fun event. Very popular and sold out too quickly. I hope Nayamachi will organise an even bigger event next year so more people can enjoy sake together throughout.