Mochi, one of the famous Japanese tasty treat made of mochigome, a short-grain japonica glutinous rice. While also eaten year-round, mochi is a traditional food for the Japanese New Year and is commonly sold and eaten during that time. The exact origin of mochi has yet to be confirmed, but red rice was the original variation used in the production of mochi. Originally, mochi was eaten exclusively by the Emperor and nobles due to its status as an omen of good fortune. During the Japanese Heian period (794-1192 AD), mochi was used as a “food for the gods” and in religious offerings in Shinto rituals performed by aristocrats. In addition to good fortune, mochi was also known as a talisman for happy marriages. The nobles of the Imperial Court believed that long strands of freshly made mochi symbolized long life and well-being, while dried mochi helped strengthen one’s teeth.

Traditionally, glutinous rice is washed and soaked overnight on the evening before the pounding. The next morning the rice is steamed and placed in the usu (large mortar) where it is pounded with a kine (wooden mallet). The work involves two people, one pounding and the other turning and wetting the substance. They must keep a steady rhythm or they may accidentally injure each other with the heavy kine. Once the mass is soft and smooth, it is pulled into various sizes and shapes. Nowadays, there are many mochi shops that prefer using modern way with pounding machine.

This year, Hikari Mochi with Fushimi Ward governmental office in Kyoto held mochi pounding party (mochitsuki) as the continuation form last year event. The practice of pounding mochi together is now rare even in Japan, as busy people eat store-bought mochi rather than make their own and the number of family become smaller, that makes this event is interesting yet important for younger generation of Japan. Aside of that, this activity make Japanese citizens having fun together with their neighbour.

Hikari Mochi is one of the largest mochi store in Japan with many branches in all over the nation and has been run for 11th generation. In Fushimi, Kyoto, Hikari Mochi was opened since 15 years ago and has been selling various mochi products. All the products of this store has high quality and its core material harvested from its owner’s field, Nakamura Honpo. The popularity of Hikari Mochi is increasing this year when its owner was invited by a Japanese TV station to promote the store. For more complete information can be retrieved here (only in Japanese).

Fun at the Mochi Pounding Party

Participants came from the store neighbourhood and was guided by the owner, Nakamura-san. He explained how the mochi pounding process will run and then invited all the participant to wash their hands first. After that, all participants took the tray with flour on it and wearing headscarf as preparation completed. 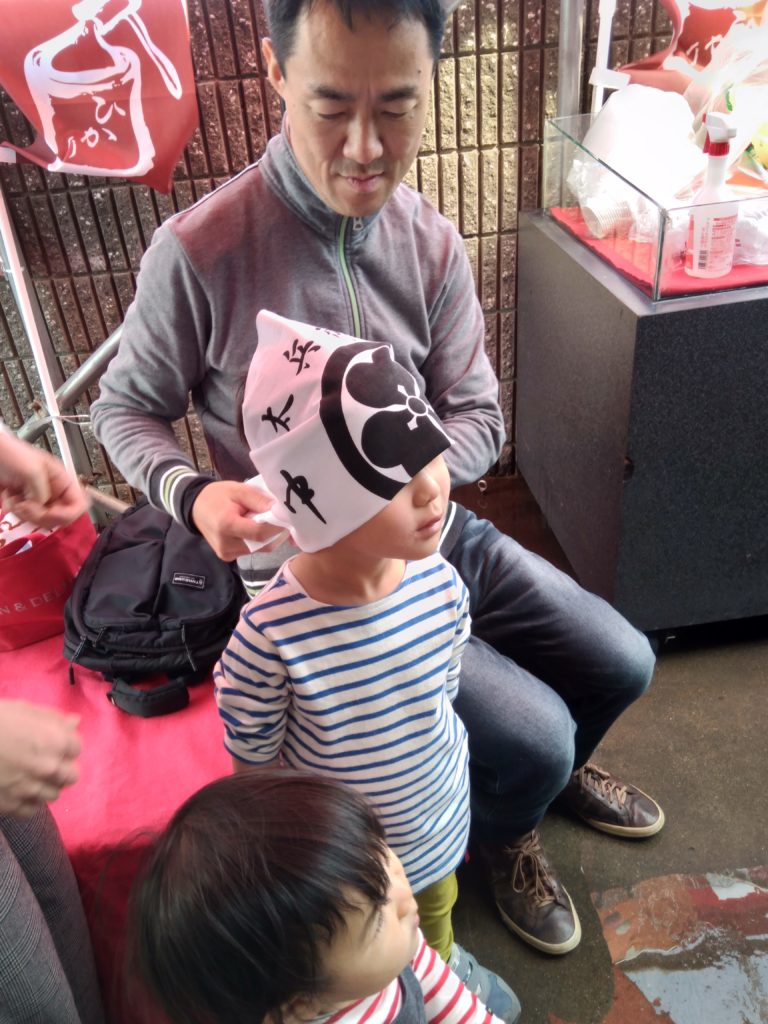 The ceremony continued to explain how to pound a mochi using kine. First, the kine needed to be lifted high above the head, then dropped on a mochi substance. This process accompanied with turning and wetting the substance, repeated several times until the mochi become chewy and delicious. All participants were given opportunity to try pounding the mochi at least once, to feel and see directly how interesting it is to make a mochi by their own. 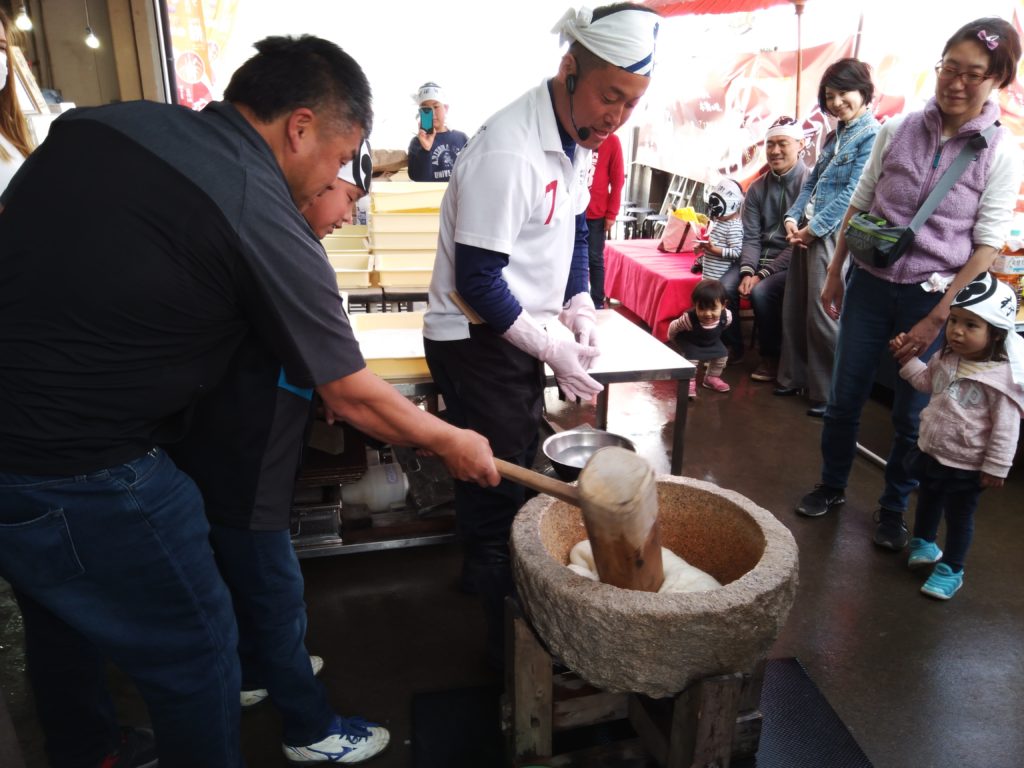 Enthusiastic father with his son pounding the mochi (author’s doc)

After pounding process is finished, the mochi was moved by Nakamura-san to be divided separately for each participant. All participants then received their shared of mochi and start to shape it into small unique edible object by their own imagination, to be eaten afterwards. The smaller unique mochi shape then was eaten with additional seasoning and snacks such as seaweed, white pickled radish, salty soy sauce, red beans, and even chocolate! In total, the sequence of pounding, shaping, and eating were repeated until three times. 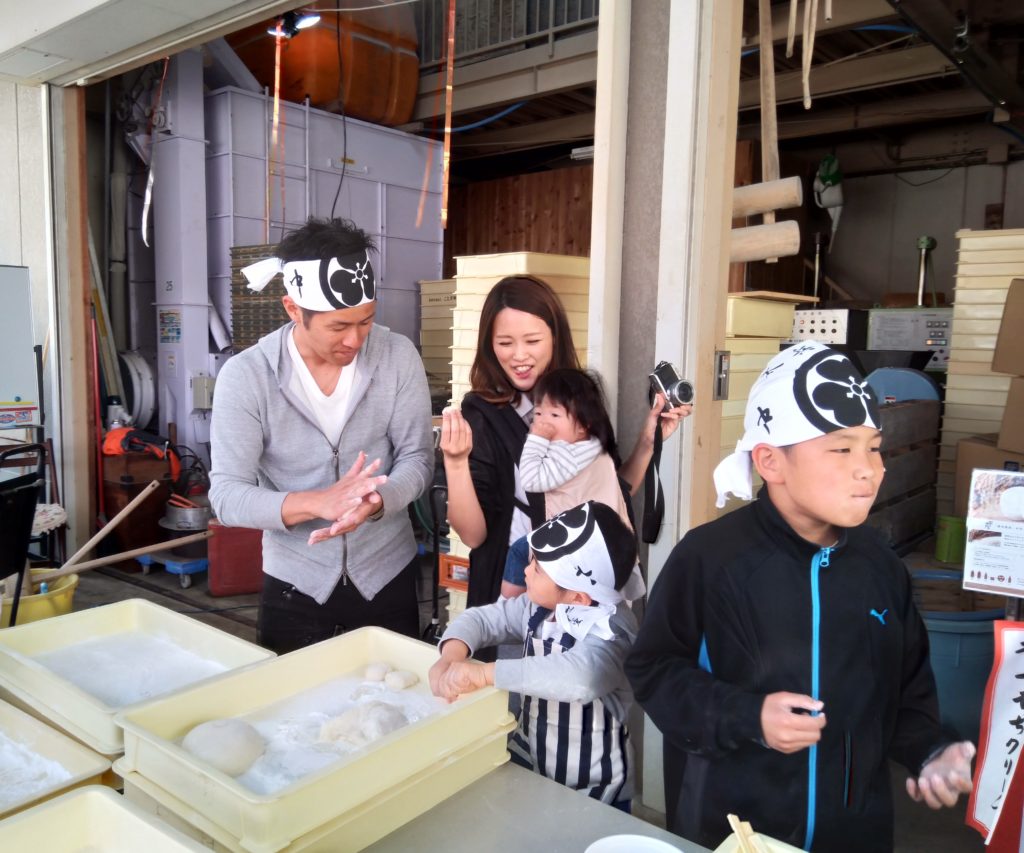 In the last sequence, the mochi was sprinkled with kinako (roasted soy bean) that made has unique yet delicious taste with the mix between chewy and rather spicy. This event also accompanied by music performance, that made the situation become very enjoyable. In the end, all participants brought home all the leftover to eat it with their family. The message that was conveyed in this event was tabette shiawase (たべって しあわせ) means eat and be happy. In the future it is hoped that this kind of event will be held continuously and can abridge the relationship between Japanese citizens and neighbourhood. 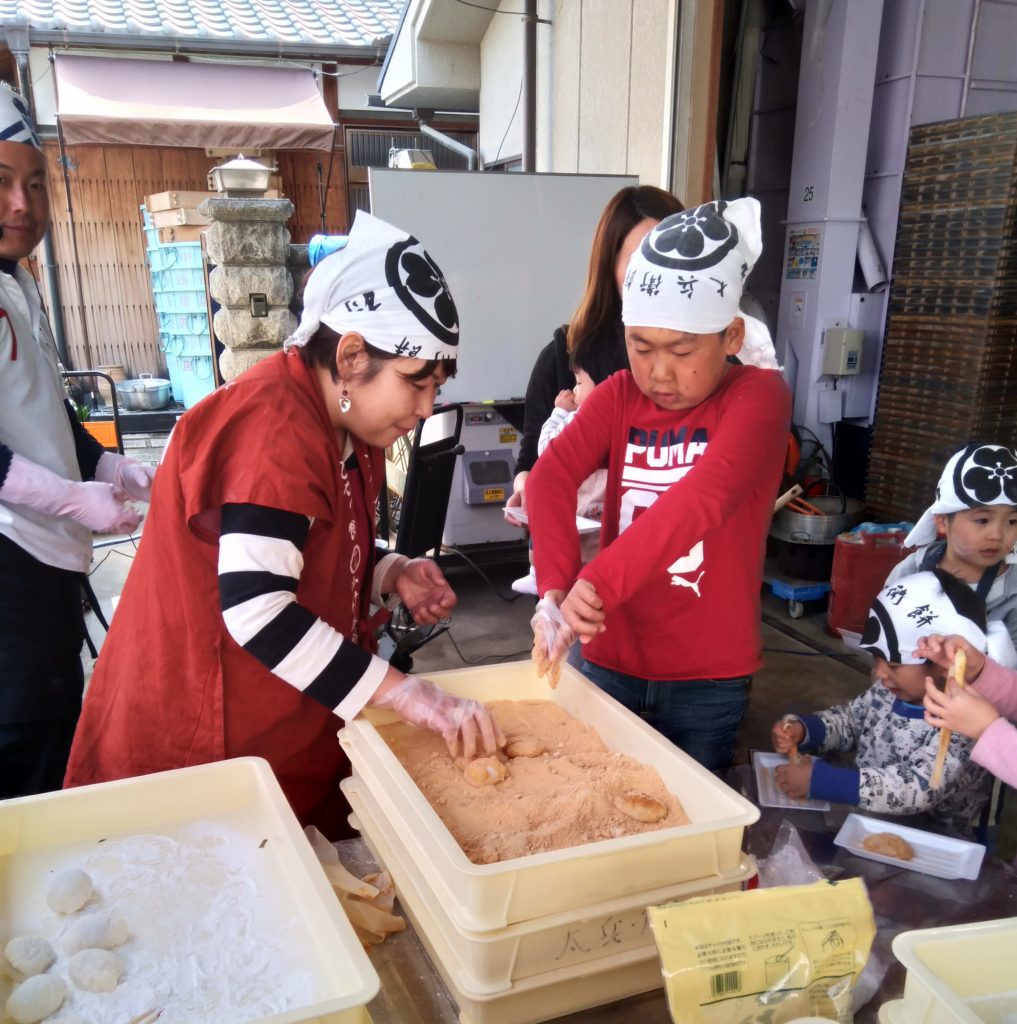